The Flexberry platform allows project team to move from the "handicrafts production" style of information systems to "industrial production". The project team is organized through proven and effective common rules, approaches to interaction and work.

The Flexberry platform allows developers to move to a new level of production process organization by introducing a mandatory design phase, as a result, companies get in a formalized, machine-readable model of the future system. The second important step in improving production efficiency is the use of ready – made modules and components of the future system-Flexberry framework. And finally, the ability to get automatically a working application by generating code based on a formalized model that ensures fast and accurate execution of business analyst’s ideas.

It is a mandatory design stage!

The design process usually involves performers in different roles. It is important to collect qualitatively information system requirements to help the team quickly and efficiently turn the formalized requirements into a ready-made application. That is the main task of the Flexberry platform. 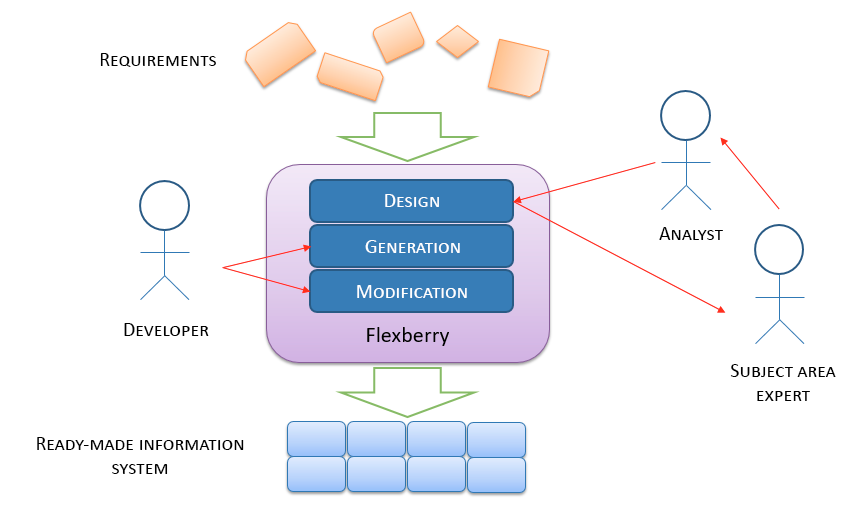 Sign up for a remote demonstration to see the Flexberry platform capabilities including implemented applications.

Apply for a demonstration

A formalized machine-readable application model is the result of using the Flexberry Designer.

The Flexberry Designer is used for work with the model

The application model can be downloaded from Flexberry Designer as a file (and then downloaded back), thus a user can save an archived copy, transfer it or make several model versions.

Platform products are available for free during the trial period or for open projects. Try it and decide if they are suitable for your tasks.

You can also see sample models in the demonstration, read more about the application model in the documentation or enroll in a training course.

The regeneration process is obtaining the source code that will be regenerated. It means that process includes merging the existing and newly generated code with saving the result.

It is also feasible to extend the functionality of existing generation modules. Create an application with a required changes description to realize your purpose. Together we can make the platform even better.

Just ask them in any convenient way and we will answer them.

You can also fill out the feedback form.